GET THE REPORT INSTANTLY!

The Minute We Release it

Founder of The Dollar Vigilante and The Crypto Vigilante

- Read the Explosive Press Release Below  -

Anarcho-Capitalist.  Libertarian.  Freedom fighter against mankind’s two biggest enemies, the State and the Central Banks.  Jeff Berwick is the founder of The Dollar Vigilante.

Jeff is a prominent speaker at many of the world’s freedom, investment and cryptocurrency conferences including his own, Anarchapulco, as well as being featured in the media.

Jeff’s background in the financial markets dates back to his founding of Canada’s largest financial website, Stockhouse.com, in 1994. In the late ‘90s the company expanded worldwide into eight different countries and had 250 employees and a market capitalization of $240 million USD at the peak of the “tech bubble”.  To this day more than a million investors use Stockhouse.com for investment information every month.

He expatriated long ago from his country of birth, Canada, and considers himself a citizen of the world.  He has lived in numerous locales including Los Angeles, Hong Kong, Bangkok and Acapulco, Mexico.

He is now one of the biggest proponents of the Permanent Traveler/Prior Taxpayer (PT) Theory.

This powerful new coin pick will be released Publicly on May 3, 2022!

Click the button below to register for the early notification list before the rest of the cryptocurrency investors in the world start to hear about it...your access is just a few clicks away!

GET THE REPORT INSTANTLY!

Breaking News: - Founder of "The Dollar Vigilante" Jeff Berwick has uncovered a key indicator in a little-known cryptocurrency that he says is set to explode in record time. Since the timing is so critical on this tiny coin, he believes it's unfair to release the name in his viral videos since everyone views it at different times.

According to Berwick, "The market cap on this coin is so small that it wouldn't be fair to just put it out in a video as people wouldn't get it simultaneously."

He goes on to say, "This coin is the most undervalued, highest potential crypto I've seen in ages. So, I will email the pick to everyone at the same time."

After doing extensive market analysis, Jeff has decided to release the name of this undervalued cryptocurrency on May 3rd, 2022.

This severely undervalued cryptocurrency is known as an Oracle, meaning that it moves data on and off the blockchain.

More importantly, it will be blockchain agnostic and operates with complete privacy. Something that is majorly lacking yet vital in the cryptocurrency industry.

Industry insiders love this crypto because it:

Because of the tiny market cap of this new cryptocurrency and because it's so undervalued, he expects rapid price gains on the release of this news. After the early release, Mr. Berwick will mention it in his videos which will likely drive up prices even higher.

But you can make sure your name is added to the early release list by clicking the button below and filling in your information. 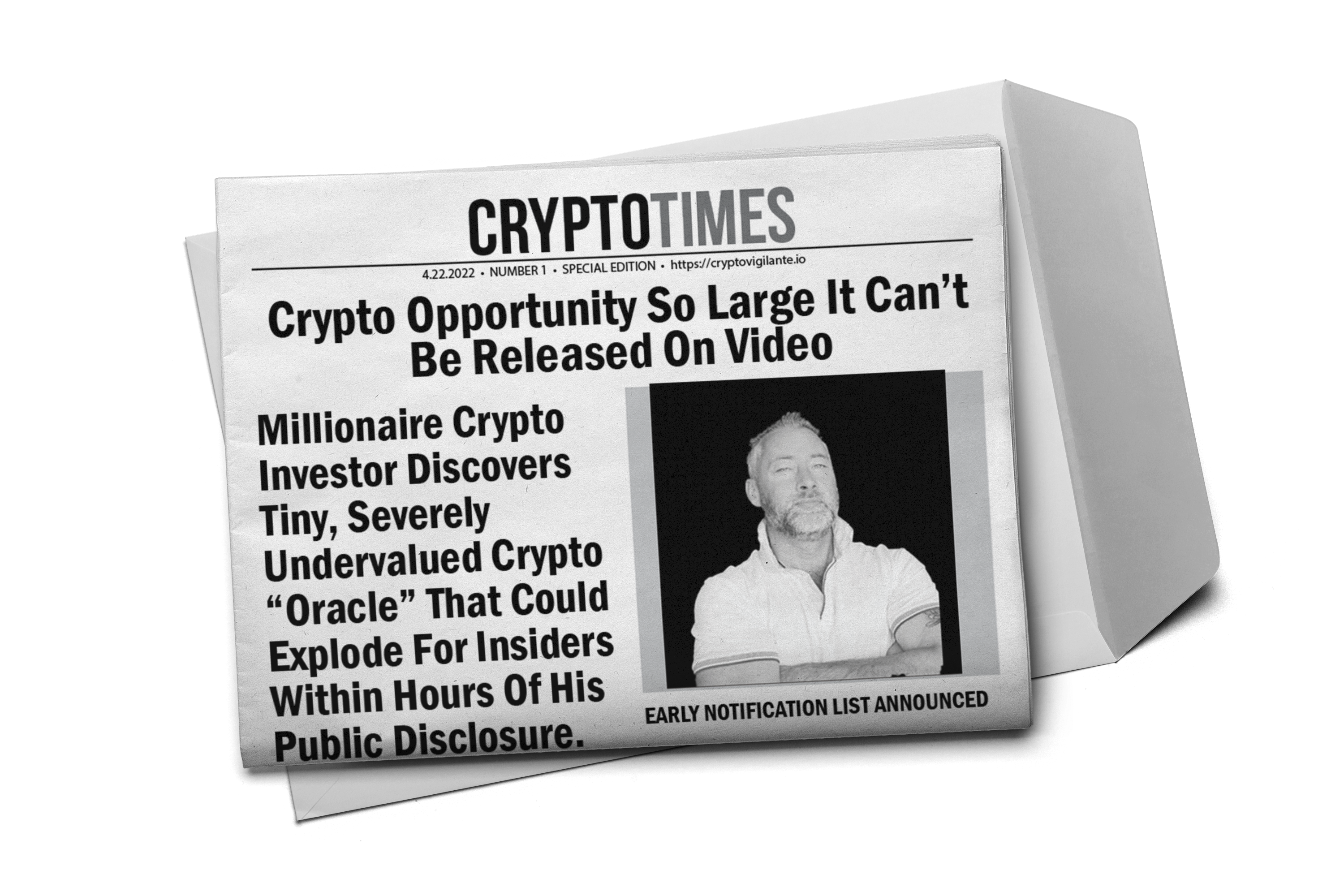 Note: Your email address will never be sold. You will be subscribed to the Free Dollar Vigilante and Crypto Vigilante Newsletters. You can opt out any time with a single click.